Go Down, Moses is a song, a hymn, a spiritual, at once religious and anti-slavery, and a song of the Civil War.

It's origin is unknown but apparently from slaves themselves, after slave owners incautiously exposed them to Christian Church services that would have featured Bible readings or sermons relating the story of Moses bringing the Israelites out of Egypt. Slaves were prohibited from learning to read, so they probably did not learn of the Exodus story from their own study.

The song may have begun to spread into wider culture when Harriet Tubman, born Araminta Ross (1822-1913), used it as a signal on the Underground Railroad, singing it to call people right out of the fields where they were working. She helped about 70 slaves escape to freedom, never losing a single "passenger" on her 13 trips, over a decade, back into the South. Tubman had herself escaped in 1849 and began to return initially to rescue members of her own family. At first getting them to Philadelphia was sufficient, but the Fugitive Slave Act of 1850, part of the Compromise of 1850, which admitted California as a Free State, strengthened Federal laws and made it necessary to take runaways all the way to Canada.

One transit point of the Underground Railroad to Canada was Auburn, New York, where the Abolitionist William Seward (1801-1872) lived. Seward became a United State Senator and Governor of New York and then Secretary of State for Abraham Lincoln -- among other things, famously purchasing Alaska, "Seward's Folly," from Russia. Tubman herself settled in Auburn, and she is buried there.

Go Down, Moses entered larger culture still when a version of it was published in 1861 as The Song of the Contrabands, using the term for slaves who were beginning to escape to refuge with the Union Army. Since slavery had not yet been abolished, and slave owners requested the return of their "property," Union General Benjamin Butler (1818-1893) decided on this own authority that such slaves would not be returned, but would be confiscated from their owners as "contraband of war." President Lincoln and Congress soon confirmed Butler's policy. So escaped slaves became "contrabands."

Over the years, there seem to have been different versions of Go Down, Moses, with considerable variation in the wording and the verses used. A pervasive difference is between the use of "Egypt land" and "Egypt's land." Similarly, a line in the chorus varies between "Let my people go" and "To let my people go." And instead of "old Pharaoh," there are various substitutes for "old," which apparently strikes some people as not very relevant or pointed. Other phrases seem to get added to verses is various versions. What I have presented involves the forms with fewer words. I think this is more direct and stronger. I have also tried to arrange the verses from these disparate sources into something like a logical sequence, progressing from God's original address to Moses ("Go down, Moses"), to the events and results of the Exodus.

I've tried to collate as many verses as I can find on the internet. Many of them are actually out of a Lutheran hymnal. The only explicitly Christian verse, which mentions Christ, I've placed as #13. And one verse, #10, I have only found occurring in the movie Sullivan's Travels [1941]. This movie version strikes me as possessing a certain kind of authority -- made at a time when the civil rights movement was still distant. Since Sullivan's Travels, directed by Preston Sturges (1898-1959), is otherwise a comedy, it seems odd to have a moving hymn about slavery dropped into the middle of it. What's more, we see the hymn sung by a black congregation at a church in the South, led by the marvelous voice of actor Jesse Lee Brooks (1894-1944), who also does some brief sermonizing before leading the singing.

The ironies of the scene are multiple, and apparently intended by Preston Sturges. The black congregation is welcoming a group of mostly white convicts, who arrive in shackles, like, as it happens, slaves. Brooks has already spoken of the Lord striking off chains. And Go Down, Moses, of course, is about liberating slaves. But this whole situation seems unlikely in the South of the pre-civil rights era. Brooks urges his congregation not to look down on their guests but to understand that all are equal in the sight of God. It is hard to imagine a Southern white congregation of 1941 believing anything of the sort, or welcoming a group of mostly black convicts into their midst. There were white churches and black churches mainly because the white churches did not welcome black members. And, as the hymn comes to an end, and the last convicts file into the pews, they suddenly reveal Jesse Brooks standing in the aisle, with his arms spread wide, just like a famous mural of John Brown in the Kansas State Capitol. This all may be a wicked comment on the South by Preston Sturges -- with he and all of his cast safe out in California.

The version of Go Down Moses used in Sullivan's Travels, which can be seen at YouTube, is without the extra words that I have left out here. We do only have two verses, #10 which I have mentioned, and then #1, with which all versions of the song seem to begin. This bears comparison with a great version of the song by Paul Robeson (1898-1976). In Robeson's version (which uses the extra words), we also get two verses, #1 and then what I have listed as #3. The latter is the only verse I have found that has anything to do with the Plagues visited upon Egypt, in this case the 10th Plague, the death of the First Born. This verse seems to be deliberately avoided in many versions of Go Down, Moses, perhaps because the Plagues, particularly this one, disturb some people. It is certainly hard to imagine Paul Robeson shying away from the "Plague" verse, but Preston Surges did. 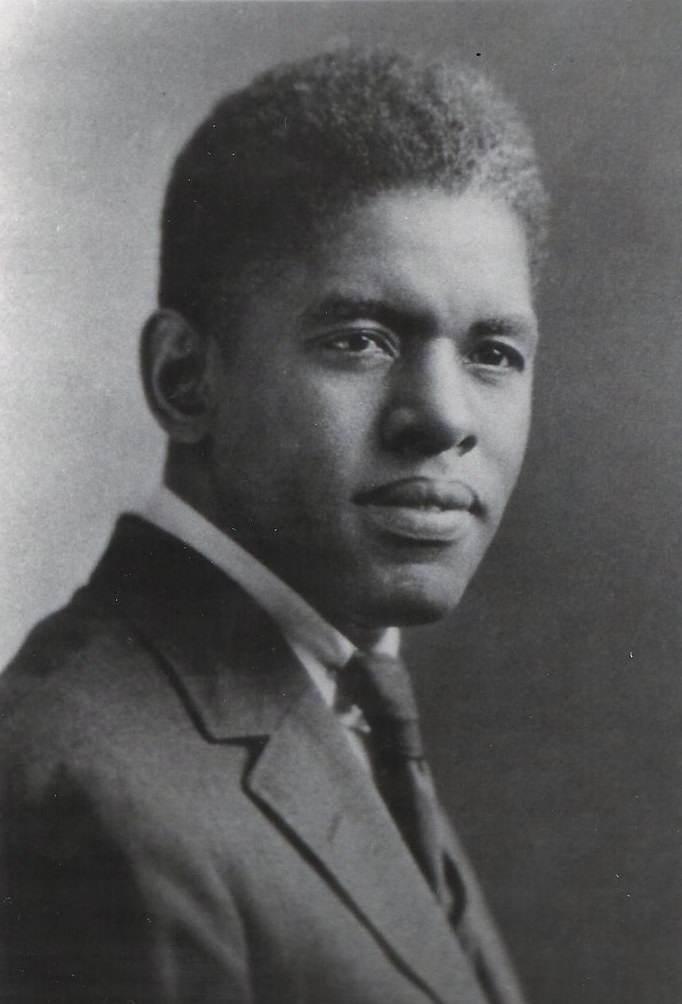 We also find verse #3 in another version of Go Down Moses at YouTube, by Roland Hayes (1887-1977), from 1922. Hayes, at right, achieved fame, like some other black artists, by performing in Europe. He even won over a hostile (racist) post-World War I audience in Germany by singing Schubert. But he was also successful in the United States, and broke a color barrier by performing Classical music. His use of the "Plague" verse may reflect his awareness and involvement in civil rights issues. He was arrested once, in 1942, for protesting his wife's treatment in a segregated shoe store. But this became a bit of a cause célèbre, and the arresting officer was fired.

Harriet Tubman herself packed a gun and was ready to use it. In the Civil War, in 1863 she actual led an attack, the "Combahee River Raid," which rescued a good 750 slaves. In 1864, Tubman worked with Robert Gould Shaw, who commanded the illustrious black unit, the 54th Massachusetts, in an assault on Fort Wagner outside Charleston. Many, including Shaw, were killed in the assault. Tubman had made breakfast for him, his last meal. Later she was present at the dedication of the Monument to the 54th in Boston.

Harriet Tubman's religious devotion was manifest in her receiving direct instructions from God, apparently often to avoid slave catchers. But Go Down, Moses, of course, has particular resonance for Jews, who may use it (obviously without what I have as verse #13 here) in Seders for Passover. They sometimes may not even be aware that its origin was not in Judaism. But the resonances here are multiple. The Exodus is for Christians a foretelling of Salvation by Christ, with the Last Supper itself a Passover Seder. For Jews, it is the literal story of liberation. And for slaves it was a prophecy, an exhortation, and a command to end slavery.

The hard edge of verse #3 was indeed a prophecy about the South. There was no single Pharaoh to petition, who Tubman, called "Moses" herself, could approach with her request; but however many slave owners there were, as multiple Pharaohs, few responded to "Let my people go." What they then paid was a terrible price. In some places in the South, 25% of the adult male population died in the Civil War. The South was devastated, and it then remained the poorest part of the United States until after the 1960's. Of course, one reason it remained poor was the fixation of Southern whites on keeping black people down, to the exclusion of their own industry -- and on the abiding disdain for manual labor, observed by Jefferson himself, that followed from its association by the Southern aristocracy with slavery. It was only with the "New South" of people like Jimmy Carter that things began to turn around. It is only now that monuments to the Confederacy and its heroes begin to be taken down -- although sometimes the sobering precedent of Bhîṣma and Droṇa might be considered.

The Double Standard Over Slavery