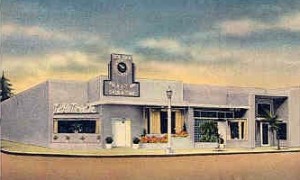 When I was little, my parents used to eat occasionally at the Tick Tock restaurant, at 10123 Riverside Drive, Toluca Lake -- the north-east corner of Riverside and Talofa Ave.

I was small enough when we were eating there that I have no specific idea about when this was. It was certainly in the late '50's and perhaps very early '60's. I also have no real memory of what I used to eat there. Except for one thing. The Tick Tock had these rolls, which I remember having orange frosting on them. To me, these were the reason to eat there.

In later years, I would every so often have occasion to drive through Toluca Lake; and at some point, perhaps in the '70's, I noticed that the restaurant was no longer there. I couldn't quite remember its name. And it had some sort of decor of clocks. It was replaced by a sushi restaurant, and now by a "gourmet" hamburger place called "The Counter," with extensive remodeling.

In fact, in recent years I drove through Toluca Lake quite a bit, going to a dentist (on Alameda Blvd.) or a friend's house in Burbank, eating at the Marie Callender's restaurant (closed in 2012, now a bank), going to a jeweler's for watch repair, eating at the

Bob's Big Boy -- 4211 Riverside Drive, actually in Burbank, built in 1949 and the oldest remaining Bob's Big Boy in the United States -- or, finally, visiting my parents' graves at Forest Lawn Hollywood Hills. But I really couldn't remember the name of that old restaurant, when I happened to think about it.

Then I saw a show about Hollywood Blvd. Among the old images of the street, there was a restaurant called the "Tick Tock." I immediately realized that this was the name of the former restaurant in Toluca Lake. I had never known that there was another location, the original one, in Hollywood, founded in 1930 --

in 1934 it moved to 1716 North Cahuenga Blvd. (a place now called "Sharkey's"). Since that restaurant didn't close unti 1988, obviously, I didn't know Hollywood all that well; and I didn't. I don't think I knew Cahuenga Blvd. at all.

The rolls I remembered from the Tick Tock were the "gooey rolls" and were popular with all. They usually had cinnamon glaze, but every week could also have orange or white (vanilla?) glaze. Either I luckily got the orange day or confused the cinnamon with the orange.

Despite a fair amount of information on the Web, including an informative Tick Tock Blog, I haven't noticed the date when the Toluca Lake restaurant closed.

So a bit of my childhood, and of Los Angeles and San Fernando Valley history, is recovered. I am also reminded of the interesting street name "Talofa," which is the Samoan equivalent of Hawaiian "aloha." I'd love to know how the street got that name, but I haven't turned up anything yet.

The Pink Lady of Malibu Canyon 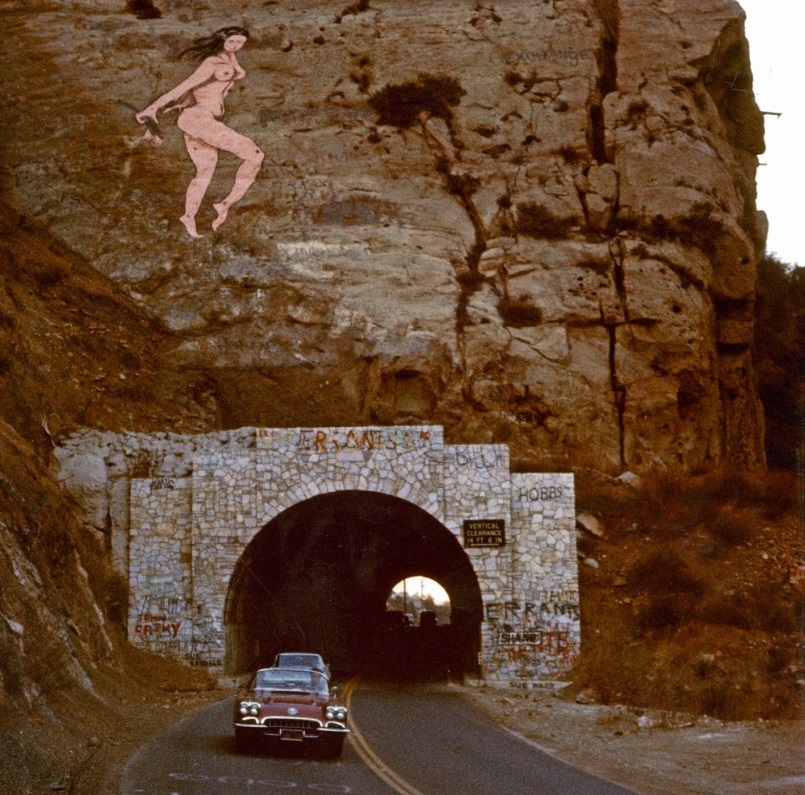 The Pink Lady of Malibu Canyon was an image that briefly existed on the rock face above the south entrance to the tunnel (the only tunnel) on Malibu Canyon Road, in Los Angeles County. This was painted in one night by Lynne Seemayer (1936-2017) on October 28, 1966. The figure was 60 feet tall.

Seemayer had disliked the graffiti on the cliff; and since January, 1966, she had been cleaning it off, dangling by rope from above. No one seems to have noticed what was going on. Nor did anyone particularly notice for a couple of days after the painting was completed. By November 1st, the consternation of LA County officials was great, and they tried twice to removed the painting, with fire hoses and paint stripper. That didn't work. Finally, on November 3rd, they simply covered it over with brown paint. Thus, the Pink Lady, like the mosaics of Sancta Sophia, remains underneath, and not forgotten, hopefully to be revealed again in a more enlightened future.

The County sued Seemayer for the costs of dealing with the painting, and Seemayer sued the County for defacing her artwork. Both suits were dismissed, on the grounds that the cliff face was actually private property -- although one might think this could generate lawsuits in its own right. Who were the owners? Feelings seemed to run high on both sides of the issue, with a lot of people, not just County officials (in a conservative area of the County, despite Malibu nearby), unable to handle a bit of nudity. Ten years later, a brief attempt to allow some nude beaches in LA Country was soon halted. If the publicity allowed much of an art career for Seemayer, who otherwise worked as a paralegal, it doesn't seem to have amounted to much; and, sadly, with many other noteable people, 2017 was the year of her death.

I was 16 at the time of the appearance of the Pink Lady, and I didn't have a car to go see the painting during its brief existence of less than a week. But the impression lingers, like an afterglow, or the warmth of a kiss.