The Sources and Influence of the Kant-Friesian School

The chart shows the cascade of Friesian influence after the Neo-Friesian revival by Leonard Nelson, together with Kantian and Scottish formative influences for Jakob Fries and for the more peripheral figures. The "Scottish Philosophy" of Hume and Smith is indicated, both for the inspiration provided for Kant, who was awakened from his "dogmatic slumber" by Hume, but also for the enduring foundation of sound economics provided by Smith.

Starting with Kant and including Schopenhauer, the whole structure might better be called the Kant-Friesian rather than the merely Friesian School.

Down the line, F.A. Hayek, C.G. Jung, and Mircea Eliade were probably unaware of the specifically Friesian influence on them.

Disciples of a great philosopher, however, who lack a sure feeling for truth are often misled into relying on the consistency of the system alone. The discovery of inconsistencies in the master's system and the endeavour to eliminate them easily leads these disciples to a world-view quite opposed to that of their teacher. ["What is the History of Philosophy?" Ratio, Vol. IV, No. 1, June 1962, p. 28]

The chart is, of course, not just descriptive, but programmatic and systematic. Identifying Schopenhauer and Fries as the proper successors to Kant is due to the judgment that Schopenhauer represents the best critique of Kant's metaphysics as Fries represents the best critique of his epistemology. That both viewed the "Subjective Deduction" in the first edition of the Critique of Pure Reason as the most revolutionary passage is significant, as is a similar use of it by a modern Kant scholar, Robert Paul Wolf, in his Kant's Theory of Mental Activity [Harvard, 1963].

Similarly, the identification of both Hume and Adam Smith in the Scottish background of the tradition represents a judgment, not just that Hume and Smith were well known and sympathetic to each other, but that Smith's theory of the free market in the Wealth of Nations is still the foundation of all productive political economy, mostly ill appreciated in the 20th century apart from Austrian economists like F.A. Hayek and Chicago economists like Milton Friedman. The personal and theoretical association of Hayek and Karl Popper ties Austrian economics firmly into the Friesian tradition.

On the religious and psychological side, Jung and Eliade may seem more peripheral, except to the extent that they rely on Otto, who is substantially and firmly Friesian, and (independently for Jung) on Kant and Schopenhauer. The use of all these figures, of course, implies a more substantial content for religion, both epistemologically and metaphysically, than Kant, Fries, or Nelson would have been willing to admit.

The inclusion of Freud and Nietzsche is only appropriate as background for Jung and Camille Paglia. The initial formative influence of Freud on Jung's mature thought, and the substantial influence of Schopenhauer through Nietzsche, motivates the reference for him. Paglia may seem to some as too much of an intellectual lightweight to be included on the same level as the other figures. However, Paglia is one of the few recent art historians who does not suffer from a facile, thoughtless political leftism. In fact she characterizes herself as a libertarian, which places her in almost unique agreement, for modern American academics, with the Classical Liberalism of Popper and Hayek. In positive terms, Palgia's theory is basically a Jungian one, of sexual archetypes, reflected in a Jungian title (i.e. Sexual Personae -- like Ingmar Bergman's 1966 movie Persona), even though she discusses Freud more than Jung. Paglia herself certainly has no interest in or even awareness of the Friesian School, but her thought, independently and unintentionally, requires and promotes the Polynomic Theory of Value. Paglia's theory of aestheticism, that the value of art is independent of any moral or political purpose (similar to the argument of art historian and critic Robert Hughes in his The Culture of Complaint [Oxford, 1993]), avoids being a theory of moral aestheticism, which would deny the significance of moral judgment, since Paglia clearly retains the full force of moral judgment with it. This is conformable to the distinctions found under "The Fallacies of Moralism and Moral Aestheticism", which are illustrated in "Logical Relationships of Moralism and Moral Aestheticism". Paglia's whole treatment thus stands as an important counterpoint to Nelson's own theory of moralism, one of the most important features of Friesian ethics. 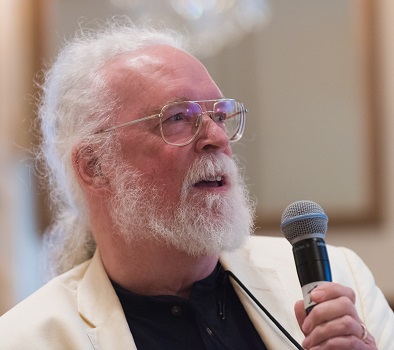 At left, I am at a Reason Weekend event in Philadelphia on April 29, 2016, asking Camille Paglia herself if she had any plans to publish the promised second volume of Sexual Personae. She answered "No," but said that the material from the second volume would eventually all be out in essay form, volumes of which she has been publishing. This is disappointing, since a unified and sequential narrative is a very different business from collections of essays, especially as the continuation of the narrative of Sexual Personae. But Paglia continues as an unusual academic in the humanities who values history, art, and beauty, retains moral awareness, and is not absurdly hostile to conservatives and traditionalists. Nick Gillespie of Reason magazine, who was interviewing Paglia for the audience, remarked on the surprising "moralism" of her thought. Of course, he did not mean what "moralism" means here, which is the extension of moral judgment into issues of non-moral value (like art), but only that he was aware of Paglia retaining and appling moral judgments, where appropriate.

The inclusion in the diagram above of Husserl, Heidegger, and Sartre, many of whose ideas, including nearly all epistemological, political, and ethical ones, are quite contrary to Friesian principles, is appropriate for the contributions of Phenomenological thought to metaphysics. Those contributions, concerning consciousness and transcendence, are considered in "A New Kant-Friesian System of Metaphysics" and The Origin of Value in a Transcendent Function.

A systematic and programmatic approach to the Friesian tradition is, of course, very much at odds with the tendencies of modern academic philosophy, especially Anglo-American academic philosophy, which expresses both scepticism and positive hostility towards systematic efforts and where the typical vehicle of philosophy is brief papers on dissociated, isolated issues. Such is the heritage, as Popper has noted, of Logical Positivism, which denied the status of knowledge to anything but science and gave to philosophy only the role of describing science or clarifying meaning. The next step, whether the later Wittgenstein, deconstruction, or "post-modernism," was to dismiss science as well and to deny that meaning can be clarified, which brings us to a final nihilism in which philosophy mirrors all the absurdity and meaninglessness of an Existentialist world.

The Principles of Friesian Philosophy

The Curse of the Friesian School

Return to Friesian School on the Home Page

Return to Neo-Friesian School on the Home Page