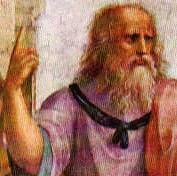 Now beauty [κάλλος], as we said, shone bright among those visions, and in this world below we apprehend it through the clearest of our senses, clear and resplendent. For sight [ὄψις] is the keenest of the physical senses [αἰσθήσεις, singlular αἴσθησις], though wisdom [φρόνησις] is not seen by it -- how terrible [δεινός] would be our love [ἔρως] for it, if such a clear image [εἴδωλον] of wisdom were granted as would come through sight -- and the same is true of the other beloved [ἐραστά, singlular ἐραστόν] objects; but beauty alone has this privilege [μοῖρα], to be most clearly shown [ἐκφανέστατον] and most lovely [ἐρασμιώτατον] of them all.

He hesitated, then, almost as though he were surprised as his own words, he said, "Go, and sin no more!"

Baley, suddenly smiling, took R. Daneel's elbow, and they walked out of the door, arm in arm.

Note that most of these items are cross-indexed from the directories for epistemology, metaphysics, ethics, and philosophy of religion.