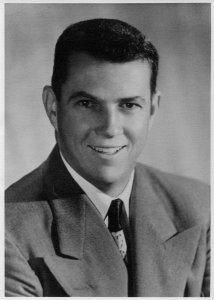 C. Edgar Goyette, Jr. was a professor of philosophy and humanities at Northern Arizona University, in Flagstaff, Arizona, from 1960 until his death in 1972. At a time when few in the United States had heard of Jakob Fries, Professor Goyette actually taught Jakob Fries. Unfortunately, a fate that has often blighted the prospects of the Friesian School also befell Professor Goyette, to pass away well before his time.

I learned of Professor Goyette from his son, Charles Goyette, a radio talk show host, author, and financial analyst who at the time lived in Phoenix. Charles was doing websearchs on Jakob Fries, and of course found the Fries page at The Proceedings of the Friesian School. What he wanted was to pass along his father's collection of Fries's works, which were of not much use to him. I was happy to get them, and we met in June, 2003. Charles is also, as it happens, a libertarian, I might even say a notorious one, so we could talk both philosophy and politics of mutual interest.

When I was a student at the University of New Mexico in 1967, already reading Leonard Nelson, I happened to take the train -- at the time, the called the "El Capitan" on the Atchison, Topeka and Santa Fe Railroad -- back to Los Angeles for Christmas. When it passed through the station in Flagstaff, the snow was at least six feet deep all around. There had been a historic blizzard, and the snow was deeper than the (apparently) Navajo workmen who had dug out the track. But little did I know that I could have gotten off the train and found an actual Friesian teaching philosophy nearby. I might have transferred from New Mexico to NAU, instead of to UCLA, as I subsequently did. Later, I again look the train, round-trip, from Albuquerque to Los Angeles, but, of course, I still didn't know about Goyette.

A few years ago I received an e-mail from a faculty member at Northern Arizona about Professor Goyette. Unfortunately, that did not result in any continuing connection there, where there seems to be as little real interest in Friesian philosophy as at any other American university. I am left to conclude that Goyette's efforts at the University did not result in doctoral graduates or any other students who were interested or concerned enough to work on Fries. Nevertheless, the Friesian project continues, as Professor Goyette would have wanted.